Dragons have us captivated. Mysterious, magical, embodiments of energy, they have been referred to throughout history in one form or another across diverse cultures. They still feature today in areas such as art, music, film, television, festivals, Magic, Feng Shui, Apps, national flags and astrology. October 24th 2015 marked the second World Dragon Day with events held around the globe. Dragons and the elements are closely connected – this post shares a selection of stories about this relationship with a focus on East Asia and Europe. 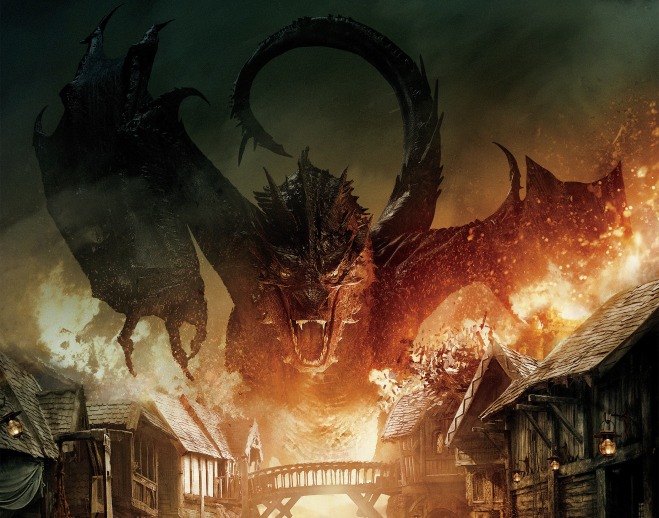 Dragons are often depicted as evil and destructive in the west. The fire-breathing Smaug in The Hobbit is a perfect archetype for this sort of dragon. Other types of dragons are found, many of which are benevolent. Source: lotr.wikia.com

The story of dragons is a complex and fascinating one with a long history. Their nature varies between cultures – they may bring good or bad fortune; some have wings, others don’t; the number of legs and claws varies; they can live in the aerial, terrestrial or aquatic realm; not all dragons breath fire; and so on. Fundamentally though, the dragon is described as a winged or feathered serpent often associated with water and water bodies. It represents a larger-than-life link between the natural and supernatural worlds.

There are many theories about why most cultures have believed that the earth, sea and sky was inhabited and shaped by dragons or serpents. The connections between these creatures and elemental forces such as fire and floods, plus their mastery of the air and wind, is possibly one of the reasons they have captured our imagination through time. The human relationship with snakes is part of the story as well.

In China the earliest records of dragons date back to 5000 BC. They are considered yang in nature, the guardian of the east and the controller of rain and tempests. The dragon historically represents the symbol of the Emperor and is the most auspicious animal in the 12 year cycle of the Chinese Zodiac. Depending on the year in which a person is born, the dragon is associated with Earth, Fire, Water, Wood and Metal ‘elements’. The most recent Year of the Dragon in 2012 was associated with Water, the next one in 2024 will be associated with Wood. According to Chinese horoscopes these different combinations affect the personality and life-paths of individuals.

Swarovski created this limited edition piece, available only in China, for the Year of the Water Dragon in 2012.

Dragons and the elements are also associated with Feng Shui, the Chinese system of geomancy used to determine the best location and design for buildings, houses and graves. Feng Shui masters treat the Dragon with great respect as it is looked upon as the ultimate symbol of good fortune. Having the 5 Element Dragons (in this case Earth, Fire, Water, Wood and Gold) represented in a home or business is said to bring long-term prosperity. The dragons are considered extremely powerful if they are placed near water.

In Japan dragons are described through the lens of Japanese, Chinese and Indian/Buddhist philosophies. The latter two were introduced around 600 AD and had considerable influence. The astrological and geomantic systems from China with their links to dragons and the elements were widely adopted. As the dragon is a protector of Buddhist law, most Japanese Zen temples have at least one painted on the ceiling. 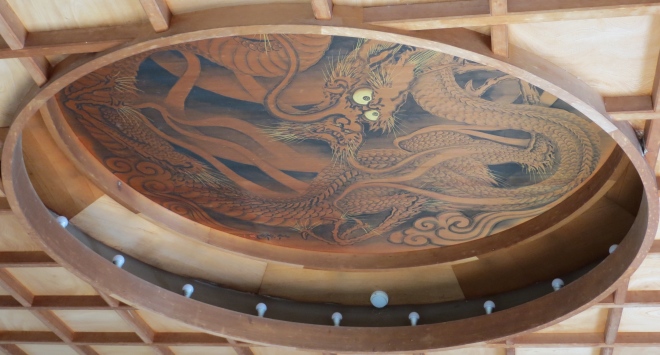 A dragon, the protector of Buddhist law, painted on the ceiling at Tenryu-ji Temple in Kyoto. The temple is a World Heritage site and is ranked as the first amongst the cities five great Zen temples.

Dragons are also important to Shinto, the indigenous belief system in Japan. It is reported that all dragons in Japan (Ryu or Tatsu in Japanese) have the ability to cause rain whereas only some have dominion over the wind. The kami associated with Osuwa Shrine in Nagano Prefecture is a dragon with control of both water and wind. As with many dragon kami, it is thought to influence agricultural activities in the area. The well-loved and widely played taiko song “Hiryu Sandan Gaeshi” (Leaping Dragon), composed by Grandmaster Daihachi Oguchi in 1972, is based on a Shinto ritual at the Osuwa shrine that calls to the flying dragon for prosperity, safety, and longevity. For those interested to learn more about taiko and elements see my post ‘The way of the drum‘.

The Flying Dragons of the North (formally known as ‘Show Taiks’) have chosen the song “Hiryu Sandan Gaeshi” (Leaping Dragon) as their signature piece. Based on a Shinto ritual related to dragons, water and wind, here the song is being performed at a concert on Bruny Island, Tasmania. Photo by Eric Graudins.

A strong connection between dragons and water in Shinto is also observed at the water basins (chozubachi) used for purification before entering Shrine grounds. The font where the water flows into the basin is often in the shape of a dragon. Kuzuryu Shrine, a sub-shrine of Hakone Shrine on Lake Ashi, was recently built to honour a dragon kami. It has nine dragon-shaped water fonts at the purification basin. Green Shinto has a post on the sub-shrine that provides further information about dragons in the context of Shinto. John Dougill, the author of this blog, makes the perceptive observation that dragons in Japan are associated with the water element whereas in the west they are associated with fire. 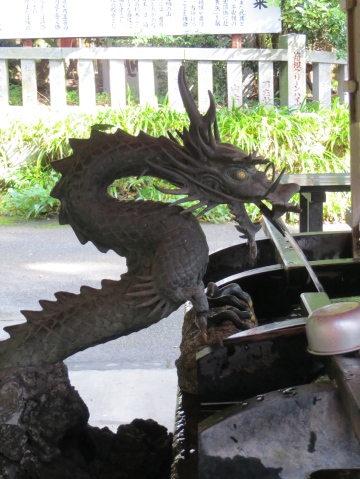 Dragon shaped water fonts are often found at Shinto Shrines signifying a strong connection with the water element. This dragon is delivering water to the chozubachi at Hakone Shrine.

One of the intriguing connections between dragons and the elements in Japan is the dragon tattoos favoured by Japanese fire-fighters (Hikeshi) in the 19th century. The fire-fighters believed that the tattoo protected them from fire. The book ‘Irezumi’ by W.R. Van Gulik provides a detailed description of the significance of the dragon tattoo and its relationship to the fire, water and metal ‘elements’ in particular. The system he describes is based on Wu Xing (Five Phases), the Chinese conceptual approach to the elements.

This unassuming looking book on Irezumi by W.R. Van Gulik dedicates a whole chapter to the Fireman’s dragon tattoo and the relationship with the elements.

The Welsh flag with its prominent Red Dragon is one of only three national flags to display a mythological creature, the other two being the Snow Lion flag of Tibet and the Thunder Dragon flag of Bhutan. It seems that the dragon symbol was introduced to the British Isles by both the Celts and the Romans around 2000-2500 years ago. The Celts and Romans in turn were influenced by other cultures in their depiction of dragons. I mentioned that the story of dragons is a complex and fascinating one! The imported dragon obviously struck a chord as the Red Dragon has been a symbol of the Celtic people of Britain and later Wales for over 1200 years and possibly longer.

Our family has Welsh ancestry. I have enjoyed learning more about the role of dragons in my family heritage. Source: Wikipedia.

It is often said that the use of dragon symbolism is associated with war and aggression in the west. The earlier image of the fire-breathing and destructive Smaug in The Hobbit exemplifies this representation. This characterisation may have been dominant in historical times. And there are certainly other examples of ‘bad-ass’ dragons in western movies, television series and Apps. More recently however characters like Puff the Magic Dragon and the dragons in Never-ending Story, Shrek and Harry Potter provide a different perspective on these creatures. More benevolent connections between dragons and the elements are also being promoted through Dragon Lore and Magic. Five elemental dragons are described in Dragon Magic – Earth, Water, Air, Fire and Chaos. Dragon essences based on the elements are also available. In this world-view dragons have personalities, morals and value honour as well as compassion and positivity in general.

It’s been my intention to write about dragons and the elements for a while. Little did I appreciate the depth and breadth of the story. Perhaps dragons do stem from a universal human imagination as some believe. There is definitely more to be told.

2 thoughts on “Dragons, forces of nature”