Goethe and I share the same birthday, albeit in different centuries. We also share an interest in science, art, literature, the natural world, communication and the elements. Best known as the author of Faust and other literary classics, Goethe also produced an extensive body of work on geology, botany, zoology, colour theory, physics and meteorology. The elements of earth, air, fire and water are woven through his efforts to read the book of nature and understand the human condition. Great thinkers and writers like Darwin, Alexander von Humboldt, Hermann von Helmholtz, Ralph Waldo Emerson, Thoreau, Carl Jung and Rudolf Steiner were influenced by Goethe’s work. There is still much to be learnt from him today. 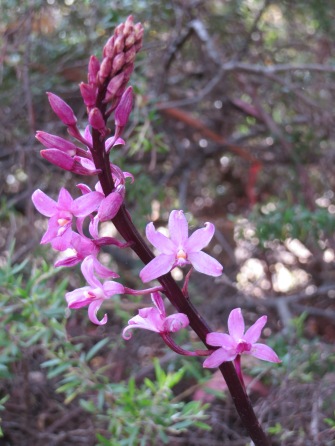 Goethe was an astute observer of the natural world. His attempt to advance the scientific understanding of plants aimed to provide a way of experiencing nature both symbolically and scientifically.

Johann Wolfgang von Goethe was born in Frankfurt, Germany in 1749. A man of prodigious talents, he was famous as a literary writer by the 1780s. Then in 1790 he published a book that is said to have transformed biological science during the nineteenth century. The title was “Attempt to Explain the Metamorphosis of Plants.” This was the first of many publications by Goethe that arose from his scientific study of the natural world. Driving his interest was a desire to find an appropriate method to investigate living things. To understand the fundamental “how” of an organism. Goethe was also drawn to the study of alchemy, a form of chemistry with strong connections to the elements.

When I visited Frankfurt in 2010 I wasn’t familiar with the scope and vision of Goethe’s works. If I was, I would have taken the time to see the house where he was born and worked.

The elements of earth, air, fire and water are woven through Goethe’s writings, including Faust. Thanks to Trinity College, a scholarly article has been written about this very subject titled “Ecocriticism, the Elements, and the Ascent/ Descent into Weather in Goethe’s Faust.” The overarching message relates to human perceptions of nature and attempts to control it. Here is an excerpt: “Faust documents the Mephistophelean belief that because we can shape nature into dykes, as if at whim, that we can also control and divert the more fundamental elements themselves.” The article provides considerable food for thought.

Arguably his most famous work, Faust is a two-part play about a man who sold his soul to the devil. Faust is a scientist who is forced to confront fundamental issues such as good and evil, sexuality and mortality. According to Wikipedia, the work remains a resonant parable on subjects such as scientific learning and religion, passion and seduction and independence and love. It has inspired a great deal of literature, art and music.

Goethe’s writings on nature have also inspired many great thinkers through time, as noted in the introduction. His belief that science and poetry, and science and art, were complementary rather than incompatible still resonates today. Nigel Hoffman provides one intriguing example, with a focus on the artistic stages of Goethe’s science of  living form – and the elements.

Nigel Hoffman draws on Goethe’s science of living form to describe four stages of scientific inquiry that correspond to the four elements of Earth, Water, Air and Fire.

Hoffman uses the elements as a way of understanding the different “dispositions of thinking” described by Goethe. Yabby Ponds, a series of waterholes 20 km north of Sydney, Australia is the setting used to undertake a Goethean study of place. Describing the area as a landscape with a starkly elemental quality, Hoffman’s essential purpose is to demonstrate a way of working with the four elements (Earth, Water, Air and Fire) within a methodology based on Goethe’s observations and insights. The result is a fascinating blend of science, art and imagination.

Goethe was prepared to put forward daring ideas even though he concluded that his scientific aspirations lay “entirely outside the intellectual horizon of the time.” He wanted his wide-ranging scientific work to reach beyond a scientific audience and viewed visual images as a significant way to achieve this. Goethe would have been pleased when a fully illustrated version of ‘The Metamorphosis of Plants’ was finally published in 2009 by the Massachusetts Institute of Technology (MIT).

I can understand how Goethe was fascinated by plants. I love studying and taking photos of them, in all of their forms. Recently these Milkweed pods caught my eye.