Awakening to a glorious sunrise over Munro Bight was one of many unforgettable experiences on a recent four day trek in SE Tasmania, Australia. There is something universally uplifting about the rising sun, especially when vibrant colours fill the sky. Like rainbows, they touch the soul and make you feel grateful to be alive. Spending several days experiencing the awe and wonder of the Three Capes region was a privilege, especially in Spring. By good fortune I had read the book ‘Shinto Moments‘ just before departing. The perspectives it contained were both complementary and contrasting to ‘Encounters on the Edge‘, the guide provided for the Three Capes Track.

The Three Capes Track was opened in December 2015. It passes through the land of the pydarerme people, the traditional Aboriginal custodians. Working with the Tasmanian Aboriginal community, several elements were designed along the track to honour Aboriginal lives and the continuation of their culture. Patch burning based on Aboriginal management practices are also used in the heathlands the track traverses. Aboriginal people have a strong spiritual connection to the land and sea – earth, sky and water are places of ancestors, spirits and beings.

Three camps along the track provide overnight accommodation and cooking facilities. The entrance to the Ratakunna (‘Creaking Limbs’ in Tasmanian Aboriginal language) camp is graced by a sculpture depicting button grass, fire and spears, with highlights of ochre. Complementary designs are continued in the main camp where Aboriginal names of native animals are used. This reflects the intimate knowledge of nature developed over the millenia by Tasmanian Aboriginal people.

Like Aboriginal cultures around the world, Shinto recognises a spiritual essence in natural objects such as mountains, rivers, rocks and trees. This animistic perspective drew me to the Green Shinto blog in 2012 and then to Japan in 2013 to attend a Shinto workshop run by Oomoto in Kameoka, Japan. If English was your first and only language, these were two of the rare opportunities available at the time to learn about Shinto outside of the academic literature.

Most recently ‘Shinto Moments‘ has been published to give English readers a feeling for Shinto, described by the authors as a Japanese nature-based way of life. Others call it a religion or philosophy. ‘Shinto Moments‘ celebrates the energy and interconnectedness of nature as well as giving guidance for a harmonious and fulfilling life. The book distills the essence of Shinto concepts and lifestyle in an accessible way. It uses photographs to transport viewers to other times, places and emotions. The Three Capes Track was the perfect place to explore the natural world and our place in it, with this book as a guide.

The driving force behind ‘Shinto Moments‘ is Taishi Kato, a 22nd generation Shinto Priest (Kannushi) from Osaka. Taishi was searching for a way to communicate the concepts of Shinto to people in English, starting with visitors to Hattori Tenjingu Shrine where he and his father officiate. Green Shinto has two informative interviews with Taishi, here (2016) and here (2017), before and after he studied in London. It was in the second interview that Taishi spoke about “being alive thanks to everything around us” as one way of explaining Shinto. The gratitude and connections embodied in this sentiment struck a chord with me. When Taishi met two Americans with shared outlooks on life, ‘Shinto Moments‘ was born.

There are numerous ‘Shinto Moments‘ listed in the book to reflect on. They encompass our relationships with nature and each other. Everyday examples are used to bring home the fundamental lesson that we are all part of the same life force: eating fresh and sustainable food, gazing on your children, viewing the moon, looking through family photos and sharing the beauty of nature are all ‘Shinto Moments‘. Understanding the natural connections between the weather and the earth, and that unpopular creatures like spiders and snakes are part of the world’s life force, are also Shinto Moments.

During the Three Capes walk my most enduring Shinto Moments were feeling the power of the life-force in the earth, sea and sky. The track passes through a great diversity of vegetation types, with spectacular ocean and sea cliffs views. We experienced sunshine, wind, light and heavy rain and contrasting cloud formations. The sunrise illustrated above, and rainbow below, were intense expressions of ephemeral beauty. They were magnificent. The walk was elemental to the core. Earth, fire, water, air/wind, ether and consciousness were all at play and all interconnected. Sometimes, when I found the uphill sections tiring, I drew on the earth for energy.

Walking in Spring (September 6-9, 2020) bought a special kind of energy and life-force with it. You could feel it deep inside. All of the senses were inundated, especially sight and sound. Plants were bursting with new growth and flowers. Whole hillsides had turned orange with the subtle flowering of the casuarina. Bees were busy pollinating. Birds were collecting material for their nests. Wallabies had joeys in their pouches. The cycle of life and the seasons was on glorious display.

Many Australian animals are active at night. Life continued unabated on the trek under the cloak of darkness or the glow of moon light. Owls called, micro-bats chirped, frogs bleated, birds greeted the dawn light and the wind rustled. Possums came down from their tree hollows and wombats and wallabies grazed vegetation close to the ground. In our normal day-to-day lives most people don’t venture outside in the early hours of the morning. We were therefore encouraged by the resident Rangers to drink lots of tea so that we would get up during the night! Experiencing the night sky and the nocturnal life-force was another Shinto Moment.

Enjoying each moment is something that I strive for. The awe and wonder of nature made it easier during the trek, keeping at bay my many thoughts jostling for attention. ‘Wind Song‘, one of the 40 ‘experiences’ along the Three Capes Track, invites you to relax, close your eyes and focus on the movement of air around your face and body. Being aware of the elements like this is a Shinto Moment. It helps us appreciate that humans are part of nature. Nearly two-thirds of the track experiences have a carefully crafted seat of some kind. A short ‘story starter’, like ‘Wind Song‘ links to a description in the Track guide. These stories are designed to inform and inspire walkers about the place they find themselves in.

The story associated with ‘The High Life‘ experience on the track has an explicit Japanese connection. The guide book encourages visitors to compose a haiku when absorbing the sights and sounds of the forest canopy. Haiku is a traditional form of Japanese poetry that seeks to capture the essence of something (a scene, a feeling, an animal, a season). The example given in the Three Capes Track guide follows:

hits the water talons out

In ‘Shinto Moments‘ the authors describe haiku as sparse Japanese poems that convey a sense of a season and a glimpse into the infinite in just 17 syllables. They say that many readers see the photographs in the book as the ultimate haiku. Both the poems and the images are designed to engage people in a greater dialogue than just the representation on paper. The stories in the Three Capes Track guide play a similar role.

In the wetter forests along the track I was in awe of the very large and old eucalypt trees we passed by and stood under. This was a true Shinto Moment. If these trees were in Japan they would be identified as sacred, with a straw rope (shimenewa) and paper zigzags (shide; representing lightning) around their girth. Seeing the sacred in the world around us is a defining feature of ‘Shinto Moments‘. Like the experience of Aboriginal cultures, a spiritual connection to our environment can help us better appreciate that we are part of nature, not separate from it. 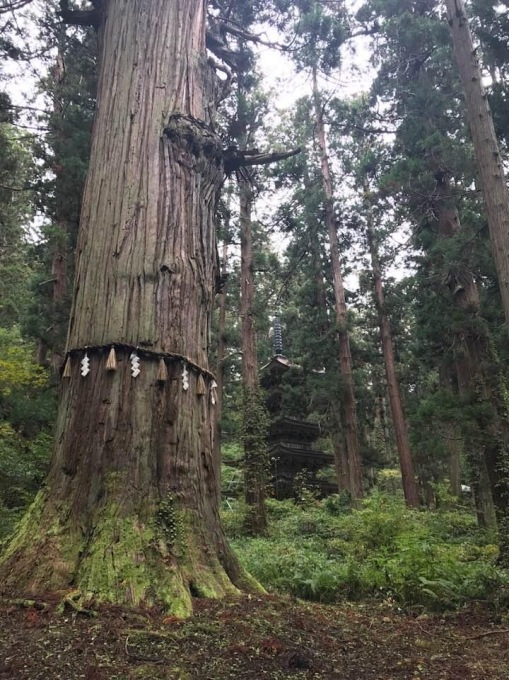 This Japanese cedar on Mt Haguro in Japan is over 1000 years old. The straw rope and white papers are Shinto symbols that identify sacred objects and places. In the background is a stunning Buddhist gojunoto (five element pagoda). Shinto and Buddhism have been intertwined to varying degrees since the latter was introduced into Japan in the sixth century AD.

The Japanese way of life described in ‘Shinto Moments‘ was equally relevant to the Three Capes Track walk. With 17 other people staying at the huts each night, social interactions were part of the experience, as they are in everyday life. As the walk unfolded I reflected on Shinto Moments in the book such as maintaining harmony, developing empathy for others, and acknowledging, accepting and adapting to change. Realising that you have a reason for being (Jp ikigai), an innate desire to help others, is presented as an especially valuable Shinto Moment. Likewise, realising that both suffering and happiness are organic in our human lives is considered especially beautiful. Every time a person opens their heart and wishes good will for another being they experience a deep Shinto Moment. These lessons about how to conduct your life apply whoever we are and wherever we are in the world. 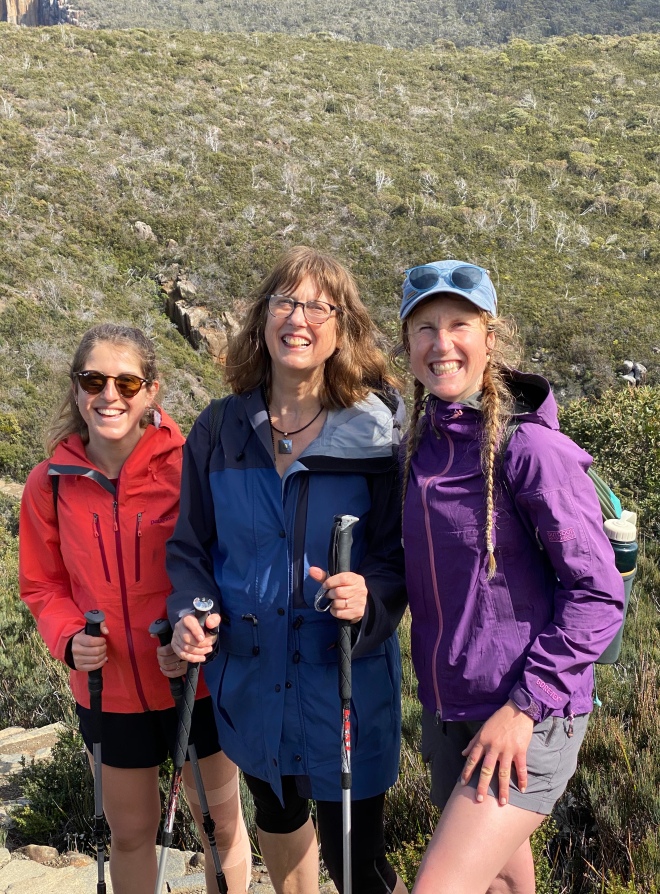 Hannah, Sally and Jess (from right to left) were having a ‘girls’ trip on the Three Capes walk. Their energy and love of nature was infectious. Travelling as a mother and two daughters, their adventure reminded me of the special times my sister Ruth and I spent with our mother Edna when she was alive. Crossing the paths of these wonderful women was a ‘Shinto Moment‘ of great delight and meaning.

Shinto has a long, rich and complex history. It comes in many guises, with several sects and Shrine allegiances in existence today. Through the Shugendo faith Shinto is still intimately connected with Buddhism and Daoism. Deep appreciation goes to Taishi Kato, Rev Koichi Barrish (Head Priest of Tsubaki Grand Shrine in Seattle, USA), John Dougill (Green Shinto) and Katsuya Kimura (Oomoto) for sharing their Shinto world views in English. Shinto is also a critical component of the JAPAN CODE, a philosophy of Japanese spirituality developed by Professor Masashi Nakamura. I have learnt much about the life-force and energy of nature, and how to interact with those around us, from these different teachers. They, and the book ‘Shinto Moments‘, made the Three Capes Track walk all the more meaningful. 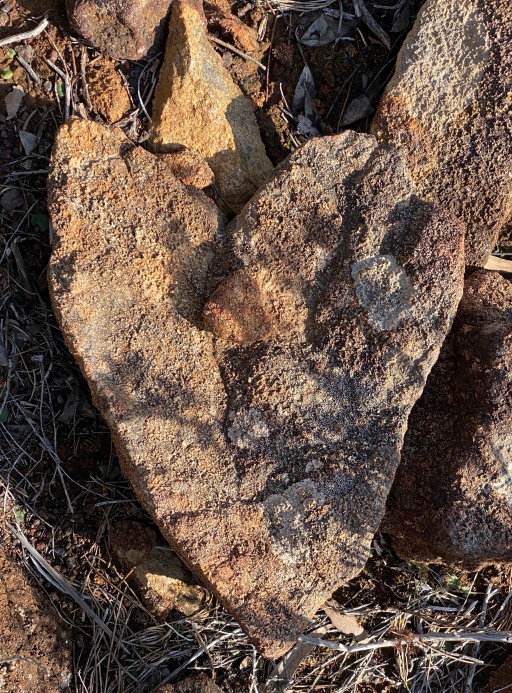 Some readers may be wondering why this post does not appear in my sister blog ‘Elemental Japan‘. While the Three Capes Track story has a strong Japanese element, it shares my experiences outside of Japan rather than those in it. Tasmania and Japan are the two elemental places that I have the strongest connection to. It has been a pleasure to write a post that brings them together. To complete the circle I have cross-linked this blog to Elemental Japan. Some additional images from the Three Capes Track are included in that post – it is such a photogenic place.

Another incredibly photogenic place in Tasmania is the Overland Track. Over six days (between October 17th-22nd 2020) I had the privilege of traversing this rugged, staggeringly beautiful country. Many Shinto Moments were experienced on that walk. In addition I selected an element that best represented each day. It was a wondrously immersive experience that led to deep reflection about the state of the world. The full story can be found here.

4 thoughts on “Shinto Moments on the Three Capes Track, Tasmania”