Once-upon-a-time – nearly 30 years ago to be more precise – a lone eucalypt seedling taught me an important lesson. The seedling was part of a major research project I was undertaking in Canberra, Australia on the response of eucalypts to fire. I had planted the seedling on a north-facing slope (which receives the most sunlight in the southern hemisphere) and it was growing much better than other seedlings nearby. Why was this so? The answer was a surprise. If I hadn’t had access to specialist equipment, I probably would still be wondering. It turned out that the interplay between fire, water and light was critical to the impressive growth of this seedling, as well as affecting the 1000 or so eucalypt trees I monitored for 18 months after the fire. Learning more about the inner-workings of these incredible plants reinforced the inter-connectedness of everything, and opened the door to further post-fire studies in Malibu, California. Looking back, it is safe to say this one eucalypt seedling changed the course of my life.

This image was taken by Dr Malcolm Gill, a world renowned fire ecologist, on Valentine’s Day in 1991 (this laminated version, which I’ve had since then, is starting to show some wear!).

The fire was on Black Mountain in Canberra – within walking distance of where I was based at the time. I used this unexpected opportunity to monitor the post-fire recovery of eucalypt trees and seedlings on north and south facing slopes of the mountain.

The fire-related explorations and experiences described here occurred at a time that seems light-years away technologically, even though it was relatively recent. The way that data and images were recorded and stored in the 1990s bears little resemblance to current times. 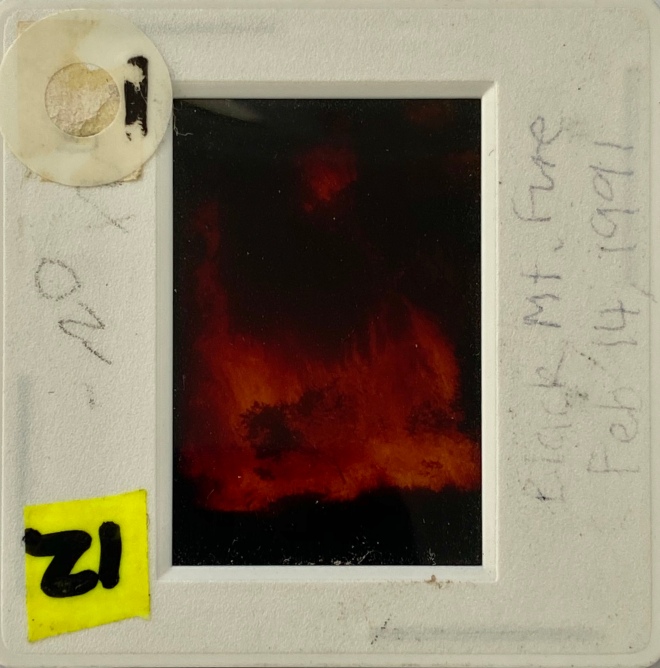 For the younger readers of this post, who may not have seen one, this is a slide! It is holding in place the negative of the fire image above, to be viewed through a slide projector. I wonder if you can buy them now, and how people will be taking photographs in another 30 years?

To keep photos over a long period it’s important to be able to access and use them as technology changes. Having not heeded this advice, unfortunately I no longer have access to the photos taken during my studies in 1991-1992. That means that unlike my other blog posts, the images used here are primarily from other sources. These are gratefully acknowledged and links provided where possible.

Black Mountain dominates the centre of Canberra – and is a bushwalker’s delight. At 812m high the mountain is home to the iconic Black Mountain Tower, used for telecommunications, views over the city and as a navigation point on the circuitous roads found in the nation’s capital. Image source: Friends of Black Mountain.

The conditions on February 14th, the day Black Mountain burnt in 1991, were conducive to a bushfire. The air temperature and wind-speed were high, and relative humidity and fuel moisture content low – as documented on the highfirerisk website. These combined factors led to a Fire Danger Rating in the mid-50s, placing it in the Severe category. The Valentine’s Day fire was reported at 2.57 pm and continued for 3 days, with a total of 112.5 hectares burnt. Houses, vehicles, research facilities and the Australian National Botanic Gardens were in the potential path of the fire. Thanks to the efforts of local fire-fighters, minimal property damage occurred. 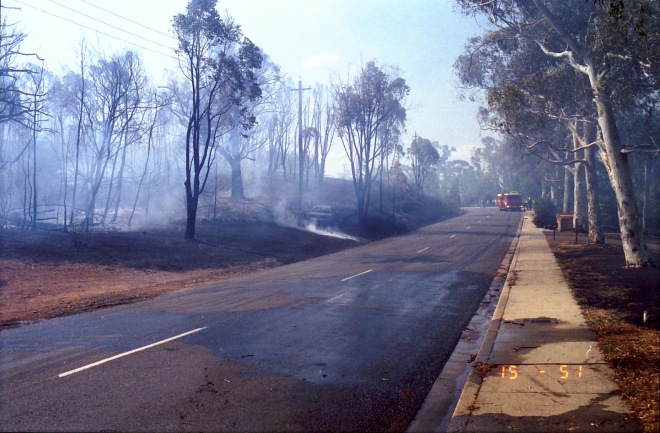 This photo from February 15th, 1991 gives an indication of the forest on Black Mountain after the fire passed through. Tree canopies were burnt and scorched, the understory removed and the ground was black and white with ash. Source: Rick McCrae (highfirerisk.com.au).

My research sites were selected further into the forest to minimise ‘edge’ effects. Fortuitously the diverse topography made the mountain ideal for my explorations.

You may wonder what it’s like to undertake research in a burnt landscape, with the smell of smoke lingering, ash underfoot and seemingly no life in sight. Some reporters refer to this as a scene of devastation. While surreal in some ways, because these forests have evolved with fire I understood that life would return and that the trees should resprout. So my purpose was to record their rates and patterns of recovery. To achieve this I located, tagged and measured over 1000 trees on contrasting north (sunny) and south (shady) slopes and planted seedlings in different locations on these same slopes.

Most eucalypts have special buds underneath their bark that can resprout after fire, if the conditions are suitable. Image source: David Blair, ANU (from a recent article on fire and wildlife in citynews.com.au).

These epicormic sprouts can occur on any part of the tree so I used binoculars to scan each individual tree in my study sites. It was an exciting time, especially when I discovered the first resprout soon after the fire, and the last one over 12 months later. What an awesome adaption to defoliation these plants have. It can take several months for a eucalypt to start sprouting, so one-off surveys conducted soon after a fire could over-report the number of ‘dead’ trees.

As more sprouts appear, trees can look like soft green candlesticks. Once the leaves in the canopy are restored, the epicormic sprouts will eventually disappear and the tree look more ‘normal’. Image source: David Blair, ANU.

Many factors influenced the patterns of resprouting I recorded on Black Mountain – the different types of eucalypt, the thickness of the bark, their location in the landscape, and the amount of light and moisture the plants received, amongst others. At the time the research made me appreciate the resilience of dry eucalypt forests following such fire events. Now I see it as a reminder of how interconnected everything is, the role that the elements play in these systems, and how energy flows can be a useful way of approaching/considering these dynamics. That is a concept I am currently working on.

As well as documenting the patterns of external recovery I wanted to learn more about the inner workings of these eucalypts. I was keen to discover what processes were underlying these post-fire patterns. With the help of special equipment I was able to listen to the water being sucked up in the tree trunks by the resprouting leaves, and measure the response of the seedlings to different light levels. What a privilege to be able to do so and what insights this provided.

To my surprise, a lone seedling on the north-facing slope (where low moisture and high light levels prevailed) afforded the greatest insights. It had noticeably higher growth rates than other seedlings planted at the same time. Scientists call such unexpected results ‘outliers’ and may remove them from their studies. I saw it as an opportunity to discover more about how individual plants respond to their immediate environment.

It turned out that the difference between the seedling responses was related to the amount of light they received during the day. Unlike seedlings on the exposed slope that were experiencing too much light (known as photo-inhibition), the ‘outlying’ seedling was in the shadow of a tree during the heat and high light of the afternoon sun. Being exposed to less light at this critical time meant it could function and grow more effectively – it did not ‘suffer’ from photo-inhibition and had access to more soil moisture; factors I was able to measure. 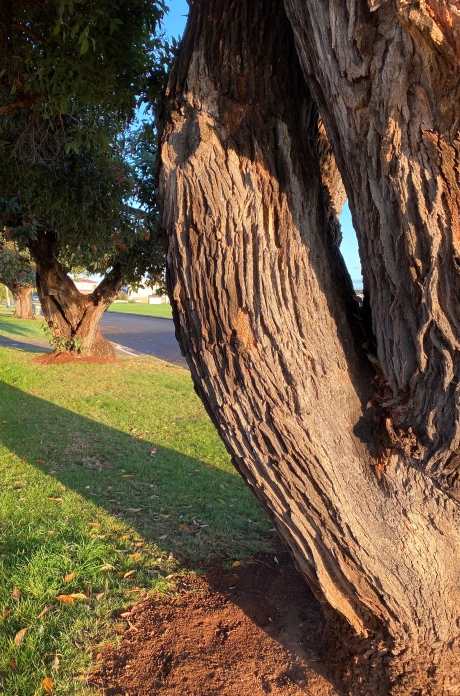 This photo demonstrates the amount of shade that a eucalypt trunk can provide – whether it is a street tree or in bushland.

The fact that the shade of a single tree could have such an impact on plant performance was a real eye-opener. Especially for a eucalypt which is seen, and sold at nurseries, as requiring full sun. This was an important lesson to learn – if some thing, or someone, is behaving unexpectedly then check their immediate environment, as well as broader influences, to help discover what is underlying the response. And try and think outside of the box. On reflection the experience also highlighted the importance of understanding the seedlings ‘inner’ and ‘outer’ nature. If I had only taken external measurements I may still be wondering why the seedling had grown more than others, or even removed it as an outlier.

The response of the seedlings, especially the lone one, was of enough interest to present at a conference run by the Ecological Society of America. In the audience was Professor Stephen Davis from Pepperdine University in Malibu, California. Based on my findings and common interests he invited me to undertake a post-doctoral study in the USA studying the response of chapparal seedlings to fire. Wow! What an honour for an ’emerging scientist’ at the start of her career. So I travelled to Malibu, measured how seedlings responded to fire (focusing on water uptake this time) and published a joint paper on xylem embolism in 1997. It is still being referred to I am pleased to say.

Pepperdine University in Malibu, California is a private institution surrounded by chapparal, another fire-prone ecosystem. My research involved travelling to the field site before the sun rose to measure how the seedlings were fairing; again light was an important element. It was an intense and productive period which I have the lone eucalypt to thank for. Image source: Pepperdine University.

Eucalypts dominate the overstory of Black Mountain. They are accompanied by a diverse range of shrubs, grasses and herbs. Many animals use this important habitat. I leave you with another photo by Rosemary Purdie, this time of the beautifully bright Goodenia – a native understory plant on Black Mountain. It too responds to the interplay of the elements in nature, close-by and beyond. Everything is interconnected. Image source: Flora of Black Mountain.

I call myself a ‘Woman on Fire’ – this is included in the title of two of my blogs: one written in 2015 (which also uses Malcolm Gill’s fire photo) in the early days of fireupwaterdown.com; the other in late 2019 that shares my Gold Medal address at the Ecological Society of Australia conference. Monitoring so many eucalypt trees and seedlings after fire on Black Mountain, for an extended period, led to an intimate and defining relationship with this energetic element. As I have written before, it is the one I have the most affinity with. Likewise, I feel a special bond with eucalypt ecosystems that continues to this day. My experience in the dry eucalypt forest in Canberra taught me humility and important lessons about sustaining these special places.

2 thoughts on “The interplay of fire, water, eucalypts and light”