I will never see my hands and fingers in the same light again. Many cultures and religions consider that everything in the universe, including humans, are made up of the elements of fire, air, earth, water and (often) space/ether/spirit. Even so, I had not made the connection between the elements and our fingers, and in particular with mudras – those elegant and powerful gestures commonly associated with Buddhism, Yoga (e.g. Raja and Hatha) and Indian dance and drama.

That was until I saw the following image during an on-line search – it really made an impression. The image shows the relationship between the fingers and the Five Elements, from an Indian perspective. The order of the elements was different on at least one website I found where the thumb represented Space, the index finger Air, the middle finger Fire, and so on. For the purpose of this post, the order of the elements is not as important as their connection to our fingers and hands.

The fingers and the five elements, an Indian perspective. Source: thedailymeditation.com

“The purpose of a mudra is to activate and create a circuit of prana in the body. This circuit channels the prana in a specific way to create subtle effects and beneficial changes in different parts of the body system. People fold their fingers in various mudras. It is little known however that Mudra science is tattva yoga. Tattva Yoga is based on science of elements.”

Prana is a sanskrit word meaning ‘constant motion’. It is referred to as the universal or original life force and has been described as the energy responsible for the body’s life, heat and maintenance. Energy and its flow is a constant theme in my exploration of the elements. The observation that the way we hold and use our hands influences the flow of energy through the body, and that it is related to the elements, is intriguing.

Carroll and Carroll (2012) explain that the influence of Vedic Wisdom, that describes the relationship between the five fingers and the Five Elements, is seen in many of the classic disciplines of India: dance, theatre, architecture, painting, medicine (Ayurveda), martial arts and yoga. As I am starting to find in many cultures and belief systems, the presence and influence of the elements are almost everywhere. It seems that in the classical arts of India the mudras are as well.

The relationship between the human hand and the Five Elements is briefly covered in this book for China (see below) and in greater detail for India. The authors note in the introduction that a highly nuanced cosmology was developed in ancient India based on the Five Great Elements (Pancha Maha Bhuta). Because the classic arts of India evolved with the context of Vedic and Tantric spirituality, the cosmology of the Pancha Maha Bhuta and the presence of mudras are almost ubiquitous. 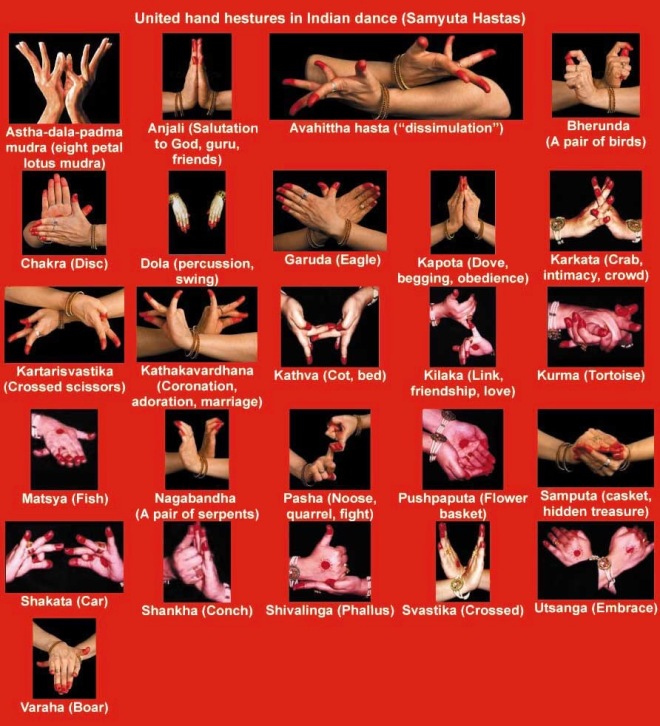 Hasta Mudras are the main focus of the book by Carroll and Carroll. 52 Hasta Mudras are found in Indian Dance, Drama, Music and Literature. They are divided into 28 single handed gestures  or Asamyuta Hastas and 24 double handed gestures or Samyuta Hastas, shown here. The Hastas are used to depict stories of Indian Gods and Goddesses, as well as various characters, creatures, elements of nature, animals, emotions and relationships within a story. The elements at the performers fingertips are a crucial part of the meanings shown by the different position of the hands. Sources: shakti.e-monsite.com and pushpanjalidance.co.uk.

In China, the shaman kings (Wu) are reported to have viewed the human hand as the most poignant examples of the five fundamental principles: Water, Wood, Fire, Earth and Air (Carroll and Carroll 2012). These principles are commonly referred to as the Five Elements/Phases, with the thumb representing Earth, the index finger Metal, the middle finger Fire, the ring finger Wood and the little finger Water. Like they described in India, Carroll and Carroll (2012) go on to write that these relationships, and the character of each finger based on the theory of the Five Elements, are woven into the philosophy and practice in China of all the traditional arts: calligraphy, Traditional Chinese Medicine, astrology, martial arts, tea culture, classical music, dance and theatre.

Chinese culture has historically had a major influence on Japan. Currently I am trying to tease out the way that this influence, and that of Buddhism, has uniquely expressed itself in the way the elements are represented and understood in this country.  A relevant lead that I am following is the Mudra of the Six Elements (Japanese = Rokukai  ろくかい) practiced by the Esoteric Buddhist Sects. This is one of many dimensions of Elemental Japan that I’m exploring.

In Esoteric Buddhism in Japan, the Five Elements (Japanese = Godai) are combined with one additional element, the mind or consciousness, to make a total of six. Statues or paintings of Dainichi Buddha, the central deity of Esoteric Buddhism, often portray Dainichi with a characteristic hand gesture called the Mudra of Six Elements (Chiken-in 智拳印), in which the index finger of the left hand is clasped by the five fingers of the right. This mudra symbolizes the unity of the five worldly elements (earth, water, fire, air, and space) with a six element, spiritual consciousness. (This information comes from a comprehensive website on Japanese Buddhist statuary. If that’s a topic of interest to you, it is definitely worth a look). 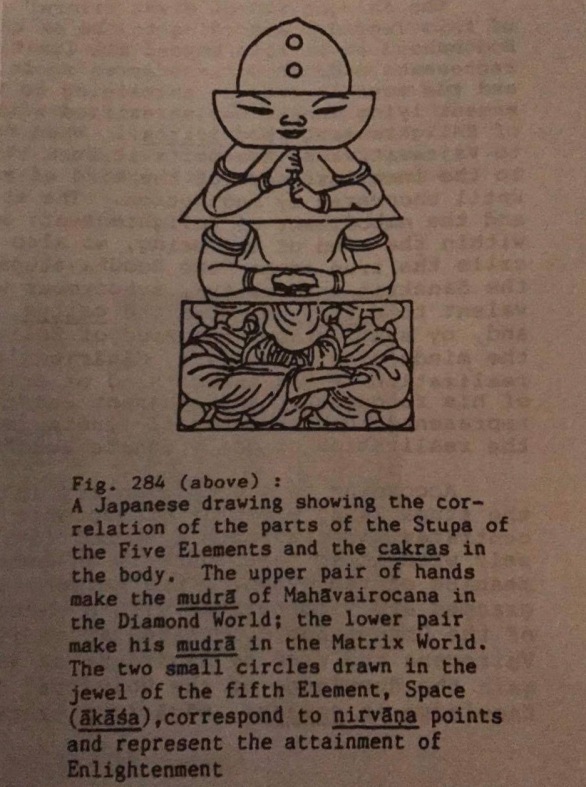 The six element mudra is also represented in the mid triangle-shaped section of this gorinto.  Also known as the ‘Fist of Wisdom’ the mudra equates to the Diamond World Mandala. The gorinto (five element stupa) is only found in Japan. This diagram shows the elements both in the fingers (represented by the six element mudra) and in the body –   represented here by the gorinto. The links to the cakras (also known as chakras) in the body/gorinto is of particular interest to me. The image comes from a classic text titled ‘The Symbolism of the Stupa‘ written by Adrian Snodgrass (1985). As well as describing the five elements in detail, he writes that the sixth element, consciousness, is present by implication in the stupa form.

This image shows in greater detail the relationship between individual fingers and the Five Elements in Shingon Buddhism. The diagram is reproduced from ‘The Art of Japanese Tantrism‘ (1979). In this case the fingers and hands also represent a number of other attributes.

Other recently discovered examples from Japan of the relationship between fingers and the elements include the hand gestures of ninja and the ritual practices of Shugendo, an ancient religion founded on mountain aestheticism.

India, China, Japan – all with the elements at their fingertips; each with a different relationship depending on the cultural context. Where else might this connection be found, one might ask?  I would love to hear from readers with additional information.

3 thoughts on “The elements at your fingertips”