What would you say if asked “what does ‘the fifth element’ bring to mind”? For many in the west, quintessence would be the answer. Or alternatively the 1997 movie “The Fifth Element”. This story is set in the twenty-third century, when the universe is (still) threatened by evil. The only hope for mankind is the Fifth Element, who comes to Earth every five thousand years to protect the humans with four stones of the four elements: fire, water, earth and air.

The movie “The Fifth Element” is an example of the intuitive elements in popular culture. References to the related ‘quintessence’ (which literally means ‘fifth essence’) also spring up in popular culture – in music, literature, comic books and even eateries. That’s probably one of the reasons why it’s in people’s consciousness.

The first known use of the word quintessence was in the Middle Ages, somewhere between the 14th and 15th centuries depending on which source you read. At this time quintessence was used by medieval alchemists to describe a medium that made up the heavenly bodies. The fifth element. It was a heavenly substance that could be found in all things, including animals, plants and minerals.

The fifth element has also variously been described as aether, space, void, sky, spirit, heart (by Captain Planet and the Planeteers for example) and love.

Aether you exclaim! Isn’t that what Aristotle called the fifth element? So I thought, until I started reading some of the philosophical debates surrounding the cosmology developed by Aristotle. Was it a four element or five element cosmology? It’s an engrossing subject when you delve into it. While Aristotle wrote about aether and its associated heavenly bodies, as I understand it the point of contention has been whether he actually described it as the fifth element. Either way, aether has become linked to the fifth element and Aristotle over time.

This Aristotlelian debate may answer some of the questions I have about why several books (and Apps/video games) written by western authors only refer to earth, air, fire and water. Possibly these are easier to relate to as tangible physical elements? So what has happened to the ‘fifth element’? Either it wasn’t explicitly there in the first place in western thinking (not the case in animist belief systems and alchemy) or it was down-played, hidden or lost during the scientific/industrial revolution. Or another explanation perhaps. There is still some serious sleuthing to be done to answer these questions.

A selection of books that focus on the four ‘physical’ elements.

Eastern philosophies/systems such as Wu Xing (China), Ayurveda (India) and Godai (Japan) refer to the five elements as a matter of course. The number of elements in Buddhism varies depending on the School/Sect being studied. Because these eastern elemental systems developed differently from the west there is not the same emphasis on “the fifth element”. Why separate out one of the elements when they are all important and inter-connected? If you were going to do so, you might expect the emphasis to be on the first, all-embracing or ‘highest’ element.

The Hindu concept of Akasha falls into this category, according the Wikipedia. This is what the entry has to say: 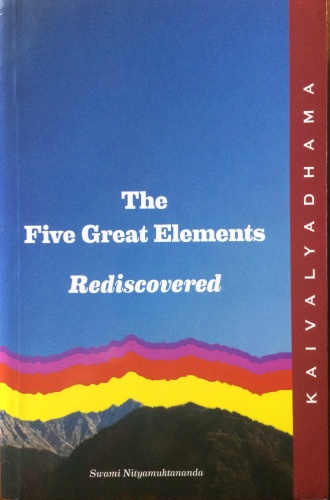 This book by Swami Nityamuktananda is a comprehensive reference on the five elements.

“In Hinduism, Akasha means the basis and essence of all things in the material world; the first material element created from the astral world. It is one of the Panchamahabhuta, or “five elements”; its main characteristic is Shabda (sound). In Sanskrit the word means “space”, the very first element in creation.”

In the article on ‘Spirit As The Fifth Element’ at lightforcenetwork, Akasha is translated as Ether/Aether (this an interesting comparison to Aristotle’s descriptions of Aether). The author identifies Akasha as both the first and fifth element, depending on the setting. That’s an important lesson when exploring the elements, to be aware of and sensitive to the cultural context. In the west for example, the association between ‘spirit’ and the fifth element has generally been in the realm of magic, witch-craft and paganism. In contrast, in the east and indigenous belief systems there appears to be universal recognition of the importance of the essence/energy of life and the universe as a fundamental component of the elements.

(Quint) Essence and the elements: multi-faceted and fascinating.

2 thoughts on “Quintessence: a multifaceted element”