In my exploration of the elements (earth, air, fire, water and ether/spirit) I keep an eye out for relevant books in second-hand shops. I’m particularly interested in how the elements have been portrayed over time, so finding a book titled ‘What is Air?’ first published in 1960 was a great discovery. And it only cost $1! A real bargain.

A great discovery at a second-hand shop – the book ‘What is Air?, first published in 1960.

According to the flap on the back cover, the ‘What Is It?’ Series, published by Collins in Great Britain, is ‘Interesting, Colourful and Easy to Read’. The illustrations are also very charming. The back flap proclaims that the book contains ‘fundamental facts of science vitalized.’ For each scientific statement about air, a number of examples are provided. So here is what the 1960s book had to say about Air. You may be surprised how vital this element is that we cannot see or touch is.

Air is real – although we cannot see or touch it, air is all around us. Air moves the branches of trees and you can hear it escaping from a tyre.
Air takes up space – as you blow up a balloon, you can feel the air fill it.
Air has weight – the pushing or weight of great amounts of air is called air pressure.
The air right around us changes from day to day – we feel these changes. Sometimes air is warm and moist. Sometimes air is cold and dry.
Air is a mixture of gases – mostly Nitrogen, 21% Oxygen, Argon, and less than 0.1% of Carbon Dioxide and other gases.
Air is needed for life – about every six seconds you breath in Oxygen which your body needs to stay alive. Oxygen helps provide heat and energy for living bodies and helps plants grow (as does Nitrogen). The water that air carries as rain is also very important to living things.
The atmosphere is an ocean of air held in place by gravity – there is a lot of interesting and beautifully illustrated information about the four layers of the atmosphere in the book.

An illustration of the troposphere, the layer of air in which we live, from ‘What is Air?’

Air movement changes the earth – we usually call air movements wind. Wind can be gentle and pleasant or may be violent and destructive.
Air carries many tiny bits of material – such as unburned carbon from factories, ash from volcanoes and sand and plant particles.
Air, sand and water change landscapes – they have carved strange shapes in mountains and air carries sand from one place to another creating large dunes.
Air helps to do work for man – it can help us move things from one place to another, be compressed in a sealed container and used in many ways.
Air can be used in transportation – including aeroplanes, parachutes, balloons and sailing boats. Birds use air for flight and gliding, and spiders drift through the air. Many plants, seeds and spores travel through the air.
Air is used to communicate – sounds travel through air to the ear of the listener. Air helps some musical instruments produce sound – passing over the reeds of clarinets, vibrating across the mouthpiece of a flute and through a tuba. As well as helping make musical sounds, air carries these sounds to our ears.
Many of the beautiful things in this world are created by air – the colours of the sunset, the sounds and smells of the seasons. 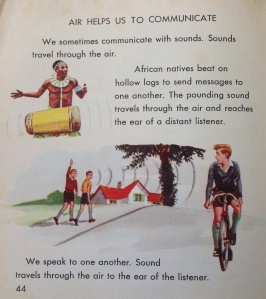 Examples of how air helps us to communicate, from ‘What is Air?’.

Air is all around us.

If I type ‘What is Air? into Google, 54 years after this book was published, the material focuses on pollution, climate change and the impact of natural phenomenon such as hurricanes. How times have changed. It’s important that we remember and reflect on the other roles that Air plays so we appreciate and celebrate the significance of this element.

4 thoughts on “What is Air? You may be surprised!”