It’s time to put the mystical continent of Africa on the elemental map. It’s been just over a year since I started my blog exploring the elements and this will be my first post on Africa. Its day has come. The cultures and belief systems found in Africa are diverse and many. Having chosen Sufism as the starting point, perhaps I could have selected something simpler! Having begun though, I felt that it was important to finish what I started.

In other posts I plan to explore a range of other connections to the elements in Africa, including the shamanistic practices of the Dagara tribe of Burkina Faso; the dynasties of Egypt; and the elemental influence of African slaves on the cultures of their ‘adopted’ countries. Diversity and mysticism abounds. I am pleased to say that the first of these topics was addressed in my post ‘The five elements of the Dagara, West Africa‘ in December 2106.

Africa is a large continent with a diversity of cultures and belief systems. Source: indiana.edu.

Rumi, a 13th century mystic born in Afghanistan, is the most well known Sufi teacher in the west. Sufism, an ancient branch of Islam, focuses on mystical energy and supernatural powers as a source to seek truth or the answer. Rumi believed passionately in the use of music, poetry and dance as a path for reaching God. Ultimately Sufis believe that Sufi music will enable them to let go of their physical being so they can embrace their spiritual essence and be one with “Allah”, God. The hypnotic dance of the Whirling Dervishes, also well known in the west, is one expression of the importance of music and meditation to Sufi practice. 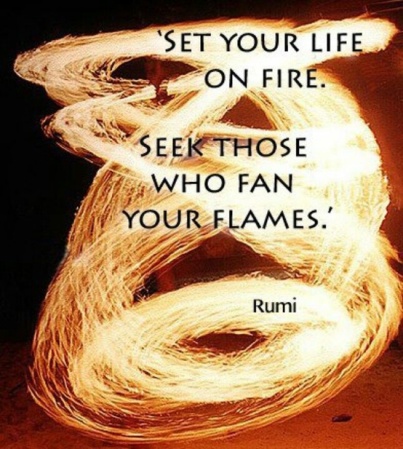 A quote from Rumi on the element of fire. Source: Beautiful DIY WordPress blog.

Sufism was an important factor in the historical spread of Islam, and in the creation of regional Islamic cultures, especially in Africa and Asia. Today it provides a social framework for African Muslims in countries such as Morocco, Senegal and Nigeria.

Some of the references to the elements that I have found in Sufism to date follow:

In the book ‘The Mysticism of Sound and Music’, the Sufi teacher Hazrat Inayat Khan writes about the elements and sound. The following excerpts are selected from the book (the bolding is mine):

“Vibrations count for the various planes of existence; the mineral, vegetable, animal and human kingdoms represent the gradual changes of vibrations; eyes see the vibrations solidified from their ethereal state and turned into atoms which appear in the physical world, constituting the elements ether, air, fire, water and earth. Every element has a sound peculiar to itself; in the finer element the circle of sound expands, and in the grosser element it narrows. It is therefore distinct in the former and indistinct in the latter”. He then goes onto describe the sound of each element. His description of the sound of the element Earth is shared here:

“The earth has various aspects of beauty as well as of variety in its sound. Its pitch is on the surface, its form is crescent-like, and its color is yellow. The sound of earth is dim and dull, and produces a thrill, activity and movement in the body. All instruments of wire and gut, as well as the instruments of percussion, such as the drum, cymbals, etc., represent the sound of the earth.” 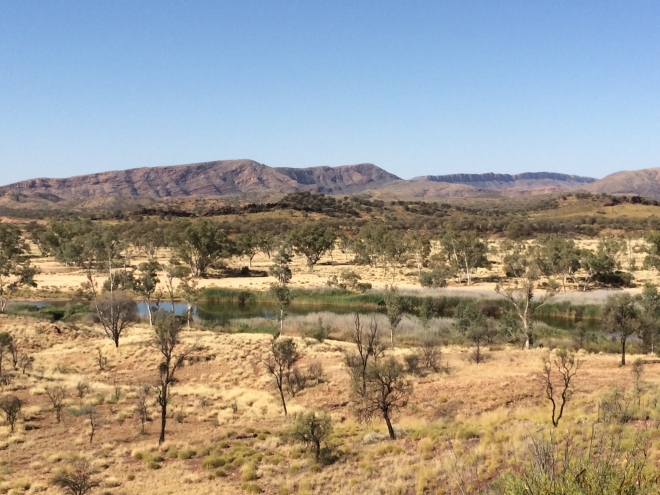 The earth has various aspects of beauty as well as a variety in its sound (Sufi teacher, Hazrat Inayat Khan). This scene from the Finke River, Central Australia would be full of sound.

The elements are also found in Sufi meditations, or kriyas. In his book ‘Secret of Love’, the twentieth-century Chishti Sufi ‘Aziz Miyan describes the elemental kriyas in this manner: “Earth kriya: Meditate while incrementally burying the body in the ground, from feet to head. Water kriya: Meditate while sitting underwater, lying in the rain, or pouring water over the body. Fire kriya: Meditate before a fire, uniting first with the smoke and then with the flame. Air kriya: Meditate standing on a tree, hill, or roof, wearing a single cloth, facing the wind. Breathe in and out slowly and deeply, inducing the sensation of flight’. Hazrat Inayat Khan also taught a series of breaths for the purification of the elements in the body and mind.

Many Sufi poems refer to the elements, including this one written by Rumi:

“I am the Gospel, the Psalter, the Qur’an;

I am ‘Uzza and Lat – (Arabic deities) – Bell and the Dragon.

Into three and seventy sects is the world divided,

Yet only one God: the faithful who believe in Him am I.

Thou knowest what are fire, water, air and earth

Fire, water, air, and earth, all am I

The deepest ground of hell, the highest torment of the flames,

The earth and what is therein, the angels and the devils.

Spirit and man am I.

What is the goal of speech, O tell it Shams Tabrizi!

The goal of sense?  This: –

The world Soul am I.”

This captivating image titled ‘Sufi – conquerer of the four elements’ was found on Google photos. Thanks go to the artist and photographer.

And this poem from the book ‘The Fragrance of Sufism’:

Through the four elements –

And on the axis of Four, Five,

And more magnificent yet,

Should the one revelation illumine your heart,

Then keep the vow of silence dear.

So why did I chose Sufism to introduce the elemental world of Africa? It’s probably not the first connection that springs to mind when most people think about the continent. That’s one of the reasons it caught my attention, as did the intriguing history and practice of Sufism.  As I’ve discovered there is more to its presence in Africa than meets the eye.

3 thoughts on “Africa, a continent of mysticism”