The Aztec Sun Stone is one of the most famous and studied monuments of the Aztec civilization. The four elements – earth water, wind and fire – play a fundamental role in the complex cosmology represented on this impressive stone carving. 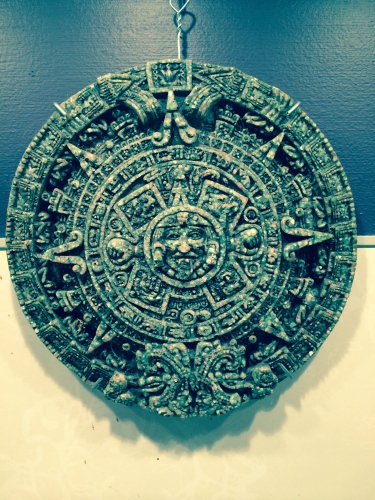 The complex cosmology of the Aztecs, captured in the Sun Stone. Thanks to my sister and brother in-law who had the reproduction hanging in their kitchen.

The link between the elements and Aztec cosmology is one I only recently discovered at the exhibition ‘Aztecs: Conquest and Glory’. I watched a video there that showed an animation of the five ages of the universe. While not explicitly stated, the connection to the elements was clear.

The five ages of the universe are known as the five suns. According to Aztec cosmology we are currently in the Fifth Sun. The four previous ages/suns were created out of destruction, from which a new and better world was born. Since attending the exhibition I have learnt that the demise of each age, and of the current age, is dictated by its ruling element – earth, wind, fire and water.

The destruction of the Fourth Sun (the sun of water) by a deluge. It lasted 52 days. Image captured from a video at the ‘Aztecs: Conquest and Glory‘ exhibition.

Each of the previous four suns surrounds the face of the God in the centre of the Aztec Sun Stone.

The Fifth Sun is the sun of earthquakes (nahui-ollin, 4 Movement). The Aztec Sun Stone itself is said to represent the last of the five ages and has been called the Stone of the Fifth Sun.

The connection between the elements of air, fire and water to the Second, Third and Fourth Suns seems clear. The earth element has been connected to the First Sun, the sun of jaguar. I wonder if a better fit could be with the Fifth Sun, the sun of earthquakes?  Someone is likely to have written about that idea somewhere….. My reading about Aztec cosmology has only begun.

As shown in the image above, the Fourth Sun (sun of water) was destroyed by a deluge that lasted 52 years. Fifty-two was a very important number for the Aztecs. Every 52 years, when their solar and sacred calendars aligned, the Aztecs conducted the New Fire Ceremony. This was a time of fear and uncertainty. They extinguished their fires, threw away most of their belongings and broke all of their pottery, believing the Fifth Sun – the present age – could potentially come to an end.

When the sun rose after the last night of the 52-year cycle people lit their fires again and bought new pottery and other goods. The fire used for reignition came from a single sacrificial source. Messengers, runners and fire priests took the sacred fire across the Aztec empire for the people to use. Imagine that, an entire civilization extinguishing their life-giving fires on the same day and having them relit from one origin. A very powerful statement.

The New Fire Ceremony, illustrated in the Codex Borbonicus (Source: Wikipedia). Four high priests take 52 pieces of wood to be burned in the sacred fire. This is the source used to reignite fires across the Aztec empire at the beginning of the new 52 year cycle.

The New Fire Ceremony is immortalized in the Aztec Sun Stone. The sign on the forehead of the God in the centre of stone refers to the beginning count of the year after the ceremony was held. It represents another 52 years of existence for the Aztec people. The ceremony also demonstrates the importance of fire to the Aztecs.

There is, of course, much more to the complex cosmology of the Aztecs. I haven’t even touched on the Gods associated with five ages of the universe/five suns. Academics debate the meaning of the Aztec Sun Stone and will no doubt continue to do so. For example, some scholars identify the God at the centre of the stone as the Earth God, others the Sun God. Whatever the interpretation, there is no doubt that nature and the elements were foundational to the religion and cosmology of the Aztecs.

The detailed chapters in this book provides useful information on Aztec religion and cosmology. The image on the cover shows the Aztec city Tenochtitlan and two sides of the Sun Stone.

Post-script: The ‘Handbook to Life in the Aztec World’ bought the story of the five suns and the elements to life. Many of the details in this post are summarised from this book.