Come with me on a journey that includes California, Japan, Australia and Google to solve the mystery of an interlocking six pointed star.

In October 2012 my sister Ruth and I travelled to San Rafael in California to attend the Bioneers Conference. This annual event brings together some great ‘movers and shakers’ in the fields of sustainability, indigenous culture, women’s leadership, social justice and much more. Before going to the conference we spent a couple of days in San Francisco and, as you do, visited some Thrift Shops there. That’s where I first came across the image of the interlocking six pointed star. At least that is what I thought it was at the time.

The star pattern was in a bowl that travelled back with me to the southern hemisphere. Not surprisingly I started seeing more examples of the pattern, particularly on items that came from Japan. So on my recent visit to that country I decided to try and solve the mystery of the interlocking six pointed star.

What does this have to do with the intuitive elements you may ask? The six pointed star, also known as a hexagram, is sometimes represented as two triangles – one pointing up and one pointing down. These triangles in turn have been related to the elements of fire, water, earth and air.

A comprehensive and informative post titled ‘Sat-kona: Star of David or Star of Goloka? also links the six pointed star and the elements through the practice of Alchemy, as follows:

“Sat-kona (the six pointed star) has also enjoyed popular use among alchemists. Alchemists of old and particularly those from the 5th century to the 15th century in Europe and the Middle East were very consistent in their use of Sat-kona. For most cultures the Sat-kona symbolized male [the upward triangle] and female [the downward triangle] or just something auspicious, but for the Alchemist the Sat-kona symbolized fire and water. Alchemists also used the Sat-kona to represent the six planets [each of the 6 points] and the sun was in the middle of the hexagram. The symbol universally represented the art of Alchemy for Muslims, Christians and Jews as the representation of the combination of opposites and transmutation”.

Was this link to the elements also the case in Japan I asked myself? On my recent travels there I saw the interlocking ‘star’ pattern many times – on onigiri (rice ball) wrappers, at a Shinto Shrine, on photographic tape, on a kimono jacket (haori) and on wrapping paper. Despite it’s apparent commonness, no one I asked in Japan was able to tell me the meaning or the origin of the symbol. That’s interesting in itself. I also saw a woman wearing the interlocking star pattern on a long-sleeved shirt. When I asked her where she bought it she said at some famous markets in northern India. Also interesting. If any one can enlighten me about potential links to this pattern in India that would be great.

It was only when I returned home to Australia and did some more internet sleuthing that I discovered the answer about this six pointed star. Finding the right search terms was all that was needed. As it turns out, the interlocking pattern is called asanaho and represents a stylised hemp leaf. Up until World War 2, when it was made illegal without a special licence, hemp was widely grown and used as a fibre in Japan and the asanoha pattern has been a popular design for hundreds of years. Because hemp was known for its rapid growth, initially it was often used for the clothes of newborn babies. Now the pattern is seen in many guises as shown by a Google image search. It appears though that the memories of hemp culture, which endured in Japan for several thousand years, may have largely been lost. 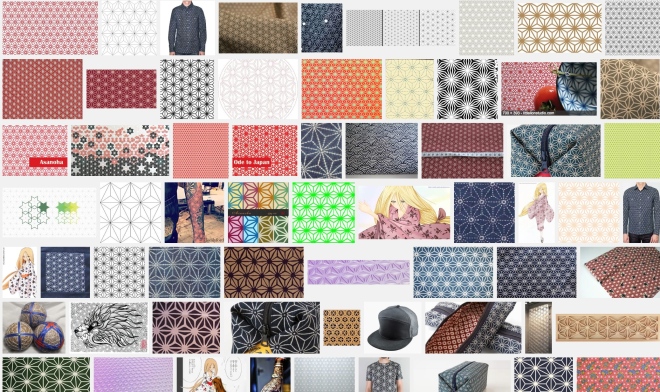 Asanoha images found on Google images, illustrating some of the variety of modern day uses

Depending on the orientation of the asanoha pattern the symbol looks more, or less, like a traditional six pointed star. While the pattern is based on overlapping hemp leaves, given its symmetry (lacking in a hemp leaf) I wonder whether there may be some association with stars and/or the elements that has been lost over time. There are also still questions in my mind about the interlocking and almost hypnotic aspect of the design.

While the link between the six pointed star and the elements in Japan requires further research on my behalf, there IS a star in Japan that is definitely related to the elements. It has five points (e.g. a pentagram), is based on the Chinese elements of fire, water, earth, wood and metal, and was created by the Onmyoji Abe No Seimei around 1000 years ago. I recently visited the Seimei Shrine in Kyoto. That will be the subject of another post. In the interim, if you would like another perspective on the Shrine and the five pointed star, you can read about it (and the relationship between hemp and Shinto) at Green Shinto.

4 thoughts on “Solving the mystery of the six pointed star, in a way”