One of the delights of undertaking research on the intuitive elements are discoveries that open up new worlds. Recently I came across a miniature-lacquered plate in a second-hand shop. This most unusual object led me to Russia, magic and the exquisite imagery and symbolism of the Firebird. 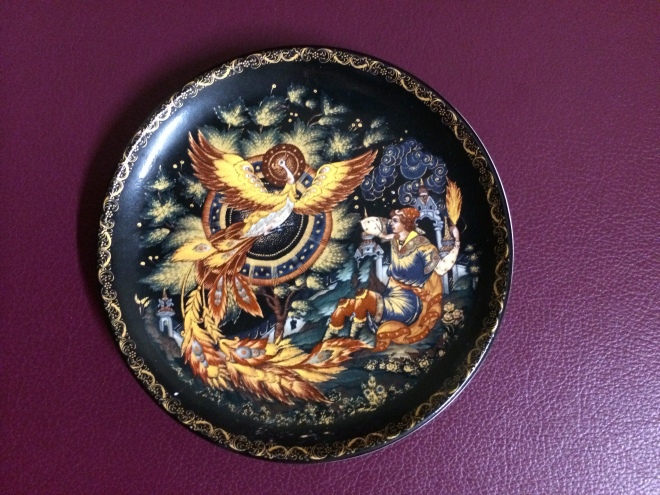 Discovering this miniature lacquered plate (10cm wide) led me to Russia, magic and the mystical Firebird.

Fire is also an element close to my heart. A desire to better understand the impact of fire regimes on eucalypt forests attracted me to post-graduate study. Since then I’ve been fascinated by fire in its many guises. So coming across this beautiful plate, and unearthing its story, has been a joy.

My starting point was to find out more about the miniature-lacquered plate I had found, with the exquisite image of a golden bird with a long flowing tail. At this stage I didn’t know the story behind the plate, or the painting, or what country it came from.

The country of origin, Russia, was easy to find as it was written on the back of the plate! The very fine image was painted by Palekhsky artist V. Hodov. I discovered that Palekh, which is north-east of Moscow, emerged as a leading centre of Russian icon-and mural painting in the nineteenth century. Today the settlement is primarily known for creating miniatures representing themes from real life, fairy tales, literary works, and folk songs.

The back of the plate fills in more of the story, revealing the country of origin and the artist.

It took more time to track down the details of the story behind the painting. The story of the Firebird has many variations across Slavic folklore it seems. In this version a king has sent his sons to catch the Firebird after it ate the golden apples in his orchard. After much adventure, deception, death and the assistance of a grey wolf, the youngest son Prince Ivan returns home with the Firebird in a golden cage, a horse with a golden mane, and a beautiful Princess.

The Firebird is highly coveted and stories associated with it often involve a quest. A large magical, glowing bird, it has majestic plumage that glows brightly emitting red, orange, and yellow light, like a bonfire. Many stories involve the Firebird dropping a feather or of a single feather being removed. This is the case with Prince Ivan, as depicted in the image. He is holding a feather in his hand – they continue to glow once they are separated from the bird, and one feather can light a large room.

Having now scratched the surface of Russian folklore, I’m keen to find out more. I have ordered a book called ‘Russian Magic: Living Folk Traditions of an Enchanted Landscape’. It is by Cherry Gilchrist, was published in 2009, and looks like it contains a wealth of information based on extensive research and personal experience. According to the description on Amazon:

“This book explains how Russia’s concept of soul (“dusha”) and sensitivity to the landscape extends to archaeologists, scientists, and doctors in Russia, who retain an open-minded approach and a keen interest in psychic phenomena, along with folk traditions and faith healing”.

The story of Prince Ivan and the Firebird is on the cover of this release of ‘Russian Magic’ (Source: Amazon).

That one sentence raises so many lines of inquiry! The Russian Federation covers a vast area. Does this concept of the soul and sensitivity to the landscape occur everywhere? It may be more prevalent in the countryside than in the cities for example. What is the relationship between these living folk traditions and the elements? There is much to be learnt.

It has been invigorating to discover the importance of the Firebird to Russia’s cultural heritage. Cherry Gilchrist writes about the Firebird being a symbol of inspiration and art. This applies not only to painting, the story was adapted for Ballet Russe and Stravinsky commissioned to write the score. There is something about the Firebird that touches a chord with people.

If I had not found the small lacquered plate by a Russian artist, I would have been none the wiser. Little did I know that, according to Gilchrist, the scene on that plate – from the story of Prince Ivan and the Firebird – embeds something of the soul of Russia.