What does the 1992 book on Captain Planet and the Planeteers and the atmospheric adventure App Tengami have in common? More than you might expect at first glance. Both include references to the intuitive elements of fire, water, air, earth and spirit, with differing degrees of subtlety. Both use pop-ups as a means of engaging their audience, even though they were created over 20 years apart using very different technologies. And both of them were drawn to my attention by people who knew of my interest in our relationship with the elements. This journey of discovery, and making connections with people through it, is one of the pleasures of exploring these themes.

I learnt about Captain Planet and the Planeteers earlier this year during the lunch break at a Creative Writing class I attended with my sister. In the early 1990s, Ted Turner and his colleagues created these characters as a way to raise awareness of the environmental challenges facing Planet Earth. In their own words ‘He’s Captain Planet, who, with the help of the Planeteers, five young people from around the globe, fights a never-ending battle against the eco-villians out to destroy the world.’ A successful animated television series aimed at children ran for several seasons. The young lady who told me about Captain Planet had watched the TV shows in her formative years. They had obviously made an impact. 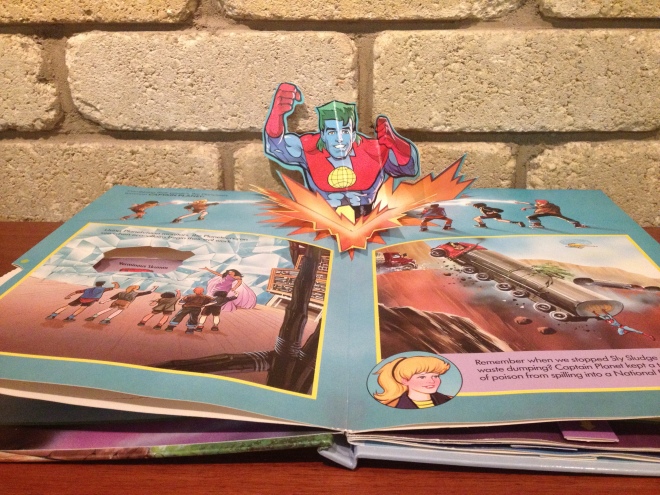 The Planeteers were given five special rings by Gaia, each with a special power of nature. These powers were Fire, Water, Earth, Wind and Heart. Captain Planet could be summonsed when the Planeteers combined their powers. Together they fought against environmental issues such as pollution and drift netting. Lots of action ensued which involved teaching the eco-villians a lesson or two in no uncertain terms. The pop-up book very effectively gives a sense of the games at play including whirl-winds of fire and radio-active rays.

Captain Planet lives on through syndication of the TV shows and the Captain Planet Foundation. The Foundation gives out grants and awards and aims to inspire and empower children and youth to create environmental solutions. The activities of the Foundation will be covered in another post, so stay tuned.

Tengami, the App created by Nyamyam Games and recently released for iOS devices, was bought to my attention by my brother-in-law. He had heard about the innovative use of digital pop-ups in the App as well as ancient Japan being the setting for the game. The elements have an enduring presence and influence in Japanese culture so the App was of considerable interest to me. It did not disappoint. The world you enter is beautifully crafted and the use of pop-ups adds an amazing dimension to the story. The technology is awe-inspiring.

The game follows a samurai who has to solve a series of puzzles while moving through different seasons and landscapes. As anticipated, there are many references to Japanese lore and ritual in the App that are intimately related to the elements. Some are subtle, but they are there, and are bound to influence a new generation.

A scene from the Tengami App, created by Nyanmar Games. Image sourced from indiehaven.com.

In contrast to Caption Planet and the Planeteers the action in Tengami is slow paced and serene. While their styles, technologies and cultural context differ, both leave you with a lasting awareness of the importance of the elements and the environment to our sense of well-being. A universal message.