Seeing the earth from above gives a new perspective on the planet we call home. This is epitomised by the image of earth from the moon captured by the crew of Apollo 8 on Christmas eve, 1968. The evocative image made people realise what we had on earth and how small it was in the universal scheme of things. Hot air ballooning, a more accessible activity that is closer to home, also allows us to (re)discover earth from the air. It is a truly elemental exercise – fire heats air, wind directs the balloon, earth and water influences the wind patterns, as well as providing the backdrop for the flight. The experience generates awe and excitement. No wonder ballooning is such a popular elemental pastime. 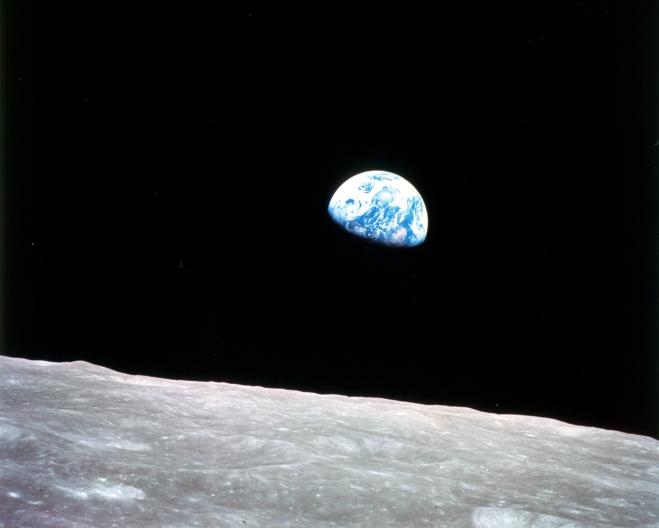 ‘Earthrise‘, one of the first images of the earth from the moon, was taken from Apollo 8 on Christmas eve, 1968. One author called the image the most influential environmental photograph ever taken due to the new perspective it provided. The motion of the clouds, a mix of air and water, is particularly striking. Source: nasa.gov

The biggest hot air balloon festival in the world is held each year in October in Albuquerque, New Mexico. An unlikely place perhaps, until you learn about the phenomenon known as the ‘Albuquerque Box’. For a few days in early October the wind patterns are composed of northerly surface winds – where cold dense air moves downhill – and southerly winds at height, created by high pressure systems over the Gulf Coast. This complex weather system forms a ‘box’ pattern that potentially allows hot air balloon pilots to take off and land in the same spot. 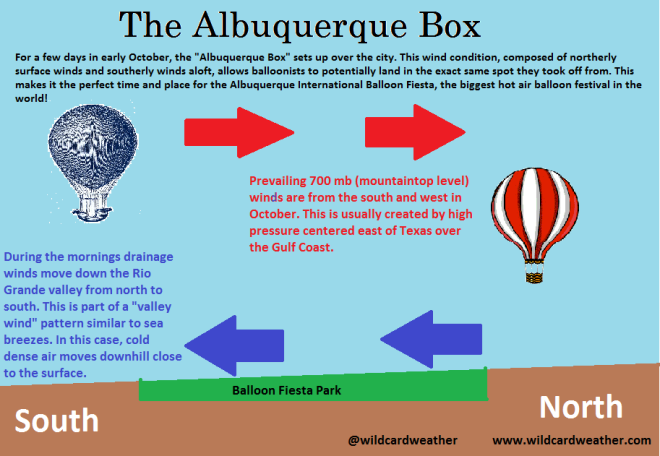 As described in this informative diagram from wildcardweather.com, the Albuquerque Box weather pattern affords balloonists an opportunity to take off and land in the same place. It is a grand example of how the interaction between earth, air and water forms wind patterns.

Elsewhere on earth, balloon pilots usually take off and land in different locations. All pilots have to balance the use of fire to warm the air in the balloon with reading wind patterns. It is a skilful role that started in Paris in November 1783 when the first untethered manned hot air balloon flight was performed. Since that time countless people have experienced the awe and excitement of hot air balloons.

My friend Siwan Lovett recently joined this group when she took a hot air balloon flight over Canberra, Australia with her family. She described it “as an amazing way to travel as you just move with the wind currents”. Flying over a landscape with hills also provided valleys to look down into. These landforms would also influence the wind patterns. It’s all interconnected.  The following images of Siwan’s flight provide the best record of the elemental nature of hot air balloon. Thanks to Siwan for sharing them.

The hot air created by the propane fire is about to take Siwan and her family over the hills and valleys of Canberra, the capital of Australia. Each ballooning day will be different depending on the wind patterns and other atmospheric conditions.

The birds eye view from a hot air balloon provides a different perspective of the place we call home. This image illustrates the leafy nature of Canberra, the national capital of Australia. The amount and diversity of vegetation provides habitat for over 200 bird species, giving Canberra the richest bird life of any Australian capital city. The cloudscapes and mountains surrounding the city are also entrancing.

Siwan is the creator of and force behind the Australian River Restoration Centre, so it is no surprise that a riparian zone or two features in her ballooning photos. This more detailed image shows the complex mosaic of earth, vegetation (introduced and native), water and houses that often occurs in peri-urban areas.

It’s true that now you can view the earth from the ‘air’ using Google Earth and similar programs. While these are fantastic tools, they are yet to capture the delight of moving with the wind currents, or feeling the heat of the propane fire, or experiencing a bird fly past. Imagine what it would have been like for balloon passengers in the late 1700s to see the earth from this perspective without the benefit of satellite imagery.

4 thoughts on “(Re)discovering earth, from the air”